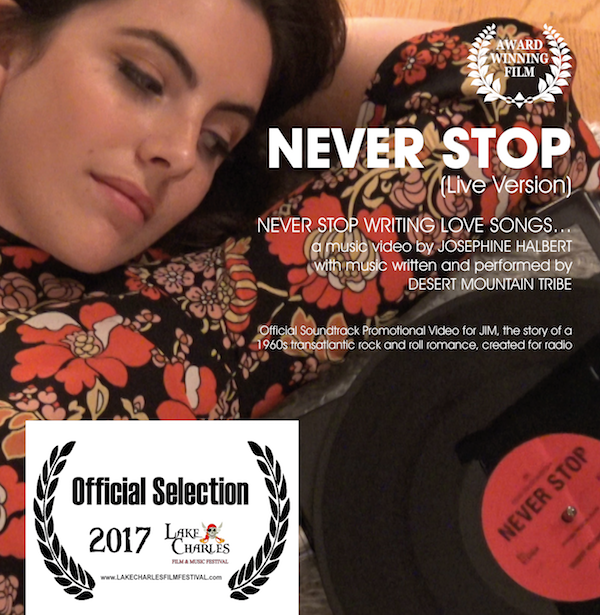 It is great news that Told In Pictures music video Never Stop (Live Version) is an Official Selection at the 6th Lake Charles Film and Music Festival, in downtown Lake Charles in October! It is a great honour for the video to be screening among fellow independent filmmakers and musicians in Calcasieu Parish is Southwest Louisiana!

Here is my Director's Statement which gives a history of the premise and the approach to the making of this video:-

The story of 'Jim' evokes a different era, the late 1960s and its 'happening' counter cultural scene which inspired a generation and I wanted to try to capture something of that atmosphere in the play and in this video.

I asked the rock band Desert Mountain Tribe to create three diverse songs for the radio play, to capture a feel of the psychedelic style of the era, two rock songs and also a 'classic love song' to illustrate the emotional journey of the young couple in the story of Jim - a song the fictional Jimwrites for the heroine.

Jonty of Desert Mountain Tribe devised this beautiful song Never Stop and I was so delighted with it.  In this video Jonty performs the acoustic Live Version and the footage is of the recording of the song, filmed in a small church near Shaken OakStudios, Oxon, UK in the summer of 2014 when we recorded the music.

We were filming video for a Making of Documentary about creating 'Jim' (the short doc The Making of Jim is viewable on the 'Jim' project pages of this website ). The two actors, Charlotte Quita Jones and Cesare Taurasi who perform the two roles in the radio play also appear in this music video. I filmed them for the documentary, recreating scenes from the story. So this video was an organic process as I filmed 'as I went along' with the creative team and we included that footage in this soundtrack accompanying video.

The video's editor Karoline Moser and I wanted to keep the video as natural and simple as possible, true to the premise of the love story and we aimed to make it a 'vintage', timeless accompanying piece to thestory of the play, 'Jim', although there are some contemporary references in shots. The play, is the muse's story, narrated by the character of Laura, lover of Jim, a well known American rock star who she meets on the eve of his European tour in 1968 and it follows their relationship over their meetings in California, London and Copenhagen. So the play is told from 'her' point of view - but Never Stop Live, the love song here in this video is telling the story from the character of Jim's point of view - a love song that Jim writes for 'her' and is featured in the play. It's a love song that everyone wants to hear in any era! - and was written specially to that brief which I feel is of added interest.

Full information about the project is available on the Jim Pages on this website.

Jim, The Radio Drama, is now available to listen to on PRX at https://beta.prx.org/stories/210887