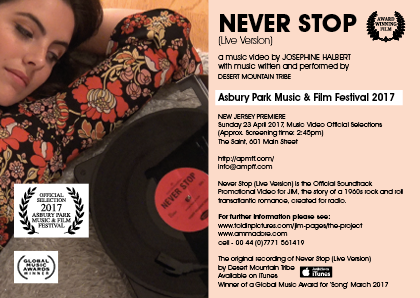 Very pleased to announce the New Jersey Premiere Screening Information at the 2017 Asbury Park Music and Film Festival for Music Video Never Stop (Live Version), the promotional soundtrack video for 'Jim', the story of a rock and roll transatlantic 1960s romance, created for radio by Told In Pictures!

It's an honour to screen at this unique festival which focuses on the role of music in film.