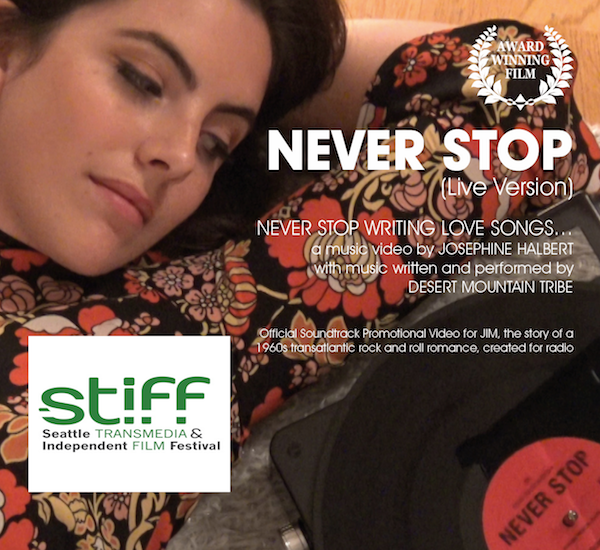 It's Official! Never Stop is Selected for STIFF Seattle Festival!

A big thank you today to STIFF Seattle Transmedia and Independent Film Festival for the news that my music video Never Stop (Live Version) is included in their 2018 official selection in July!

It's an honour to be selected by this festival that is a showcase for truly independent film and transmedia storytelling! I am so happy with the news.

Never Stop (Live Version) is the promotional music video for my audio drama 'Jim' which has just become available on Apple Podcasts as the debut audio drama on Audio Drama by ToldbyJo. 'Jim' is the fictional story of a transatlantic romance set in the 1968, 50 years ago, between an aspiring English writer and a famous American musician.  Please see the 'Jim' Project Pages on this website for further details about the video, the audio drama and the original soundtrack.

The music video, Never Stop (Live Version) will celebrate its 45th international film festival selection when it goes to STIFF in July.  The video features the live recording and performance of the song Never Stop by Jonty Balls of the rock band Desert Mountain Tribe who composed the song to the brief to write a classic love song that the hero in the story writes for the heroine.  The 'Jim' soundtrack that was specially commissioned for the story, was composed by Desert Mountain Tribe and is available to download on Apple / iTunes - 'Jim EP, a radio play by Josephine Halbert with music by Desert Mountain Tribe'.