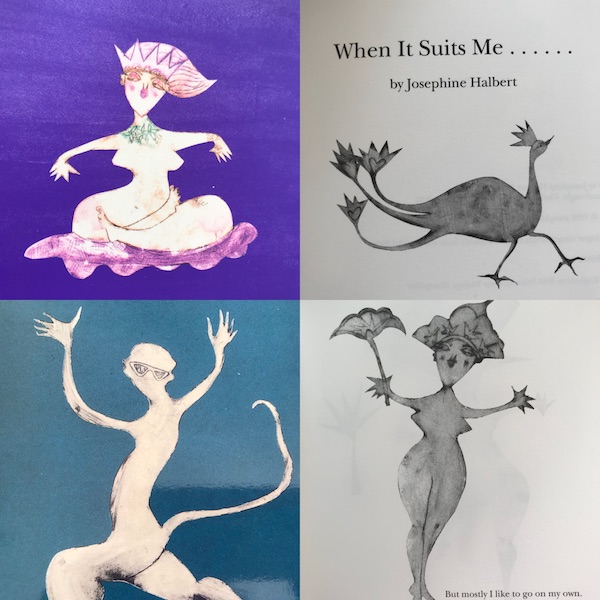 'Life's Rich Pattern' So delighted to be exhibiting in the Artist and Animator Sheila Graber's 2020 Creative Celebratory Exhibition!

I am very honoured to be invited to take part in 'Life's Rich Pattern', an exhibition scheduled for 2020, celebrating the work of the well known artist and animator Sheila Graber and her world of art, fellow artists, friends and students and beloved animals (true friends!)

I was very lucky to work with Sheila some years ago.

Sheila animated my book 'When It Suits Me..' which was my first adventure with the moving image and it subsequently led me to try making films!  I had a solo show at the Coningsby Gallery in London in the December of 1998, which was a presentation of my 'doodle' girl, my alter ego 'fairy' creature I had created who is on a quest for sensational and spiritual adventures with her fellow spirits in mythical landscapes and kingdoms. Images here! I was looking for someone to animate my characters just to project onto the Gallery wall during the show and then I met Sheila and ended up making a full 3 and a half minute short film, thanks to Sheila's vision for bringing life to my drawings and story! It had an original soundtrack too by North East composer Dave Bainbridge, produced at his studio in Whitley Bay with Ray Laidlow of Lindesfarne's company.  A North East Production!  The exhibition showed the collection of my limited edition prints of my 'character' and was also the launch of the accompanying book When It Suits Me. The short film showed at the 1999 Raindance Film Festival which was my first film festival experience and it opened a door and a passion, almost accidentally, to discovering the extraordinary world of independent film making!  I'm so delighted Sheila has asked me to share our animation project together at this upcoming show!

I loved working with Sheila.  It was the best introduction to animation and filmmaking that I could have wished for and I learned so much.  She is a wonderfully talented artist and has had an amazing career to date, and works in all media, as an animator, including working on the BBC's Just So stories and Film Fair's Paddington Bear. She is also  a portrait artist, illustrator, fine artist and storyteller and has been a great inspiration to many people as a teacher and fellow artist.

'Everyone's An Artist', is a perfect title for this show.  Sheila is a true artist and believer in 'creativity for all' and all its infinite and joyous possibilities.  It's strange timing too, and serendipitous, as my current work projects include new creative realisations starring my female doodle character... who has 'told' me that she is ready for further adventures.

I really looking forward to sharing Sheila and my animation project When It Suits Me in her Moving Image section of her retrospective in 2020 in the North East of England, in South Shields, where our project was created!