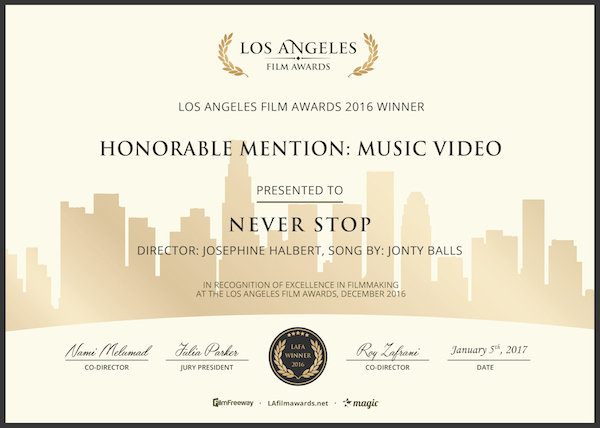 Told In Pictures production, Never Stop (Live Version), the JIM soundtrack promotional video, has been awarded an Honorable Mention:Music Video by the Los Angeles Film Awards in their December 2016 edition!

The Music Video, directed by Josephine Halbert and the Song, which is written and performed in the video by Jonty Balls of Desert Mountain Tribe, has received this award from the excellent festival, LAFA, which awards and promotes international contemporary filmmakers and the art and craft of filmmaking to the industry and to filmmakers and filmlovers alike.

A Very Big Thank You for this honour to the Los Angeles Film Awards! It is really appreciated and great news.  And a big thank you to all the creative team who made Never Stop (Live Version), the video, possible.  They are:-

Cinematographers Chris Newcombe and Mark Wickson, Editor Karoline Moser, Actors Charlotte Quita Jones and Cesare Taurasi, Hair and Make Up Artist Jenna Treat, the band Desert Mountain Tribe, The song's recording producer and engineer Arthur Young at Shaken Oak Studios whose very good idea it was to record this live version of the song Never Stop in the Church near Shaken Oak Studios where we filmed the performance in this video.

Watch the full version of this award winning video :

Never Stop (Live Version) was released by Ammadore Records (www.ammadore.com) in November 2016 and all versions of the song are available on the JIM soundtrack EP available : AppleiTunes/Apple Music

.. and it's also available on Amazon, Deezer, Spotify...