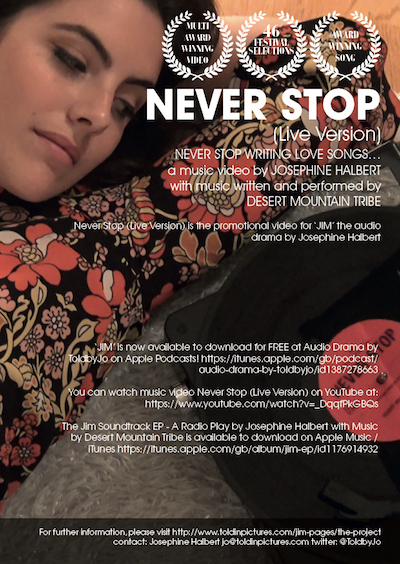 It's been a brilliant adventure on the international film festival circuit with my music video Never Stop (Live Version), the promotional music video for my 'Jim' nostalgic rock and roll audio drama and soundtrack. I want to thank all the film and music festivals who have included it in their official selections to date and I am so delighted with its continued success.  I couldn't have believed or hoped for anything better - and it has been a joy to experience its journey since its premiere at the wonderful Santa Fe Film Festival in 2016 - This video literally ...never stops... - A pause for thought about how creative ventures can go when we really believe in their vision and how to keep on the journey with them when they take off into the world and on another life of their own!  I am so honoured and grateful to everyone who has received it so positively and helped it along its way!