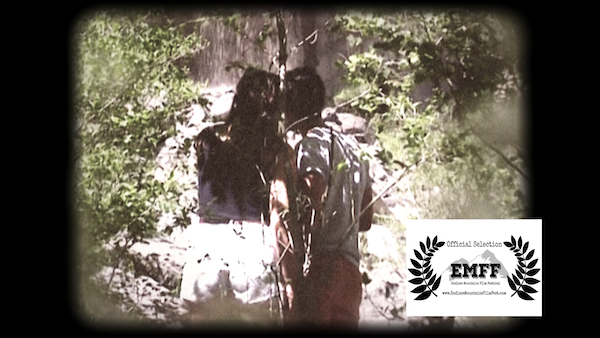 It's great news that Music Video Never Stop (Live Version) is in the Official Selection at The 2017 Endless Mountains Film Festival in Pennsylvania this September!

Thank You to the Endless Mountains Film Festival for including the video in their line-up! It's a great honour.

Here is a still of the two actors Charlotte Quita Jones and Cesare Taurasi from the video.  This shot was taken from film I shot on my old DVCam camera at a waterfall near Huesca, Spain in the national park area of the Pyrenees in July 2014.  Charlotte, Cesare and I were at the Academy Award recognised Huesca International Film Festival with Told In Pictures production A Short Epic About Love which both actors also star in.  The idea for my following project, 'Jim', a radio drama and love story set in the 1960s which the music video Never Stop is the promotional video for, was in its early stages.  I knew that I wanted to include a scene at a waterfall in Palm Springs where the two characters in my play Jim meet.  At Huesca, we were amazed to discover that only an hour's drive away was the natural landscape which could (and has done before) 'double' for California in a filmmaking dreamworld and there was even a waterfall nearby! We shot this footage on a morning's visit out into the wonderful unspoiled Pyrenees where there was a waterfall that could illustrate the Tahquitz Canyon scene in my play.  I filmed some footage there for our Making Of Jim Documentary - viewable here on the Jim Pages on this website and then later the pictures were used to capture the story in the Never Stop (Live Version) Jim Promotional music video, the filmed images being adapted so creatively to illustrate the story's nostalgic theme by Karoline Moser, the video's editor.  Organic processes are always the best - or at least the most enjoyable - and even better when fuelled by magical and inspiring serendipitous opportunities!