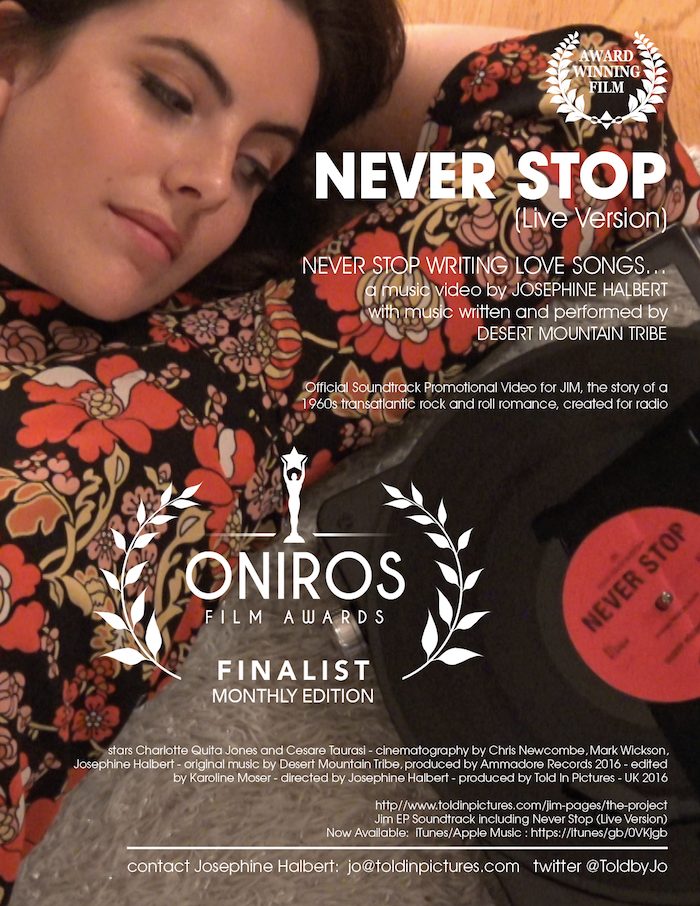 I am delighted that Never Stop (Live Version) has received three Finalist Nominations at this month's Oniros Film Awards in Italy!

It received two Finalist nominations in the Main Categories of Best Music Video and Best Song.

And it also received a Finalist Nomination in the Additional Category of ... Best Poster! Thrilled with that news!  Here is a picture of the nominated poster with Oniros Award Finalist Laurel here!

Thank You So Much  to the Oniros Film Awards (www.onirosfilmawards.com)

Never Stop was written to a brief to create a love song that the musician hero writes for the heroine in my rock and roll radio drama 'Jim', the story of a transatlantic romance set in 1968 between a well known American musician and an aspiring young British writer. It's a classic love song and a song anyone wants to hear in any era!  'Jim' is a love story, told to us through the eyes of the Laura, the heroine and muse of rock star Jim, who remembers their relationship over a series of meetings, in California and London and Copenhagen when 'Jim' is touring Europe with his band at the height of their fame.

You can now listen to the full version of Jim, the radio drama on PRX.  'Jim' stars actors Charlotte Quita Jones and Cesare Taurasi, featuring the song Never Stop and two other songs that were commissioned specially for the production sounndtrack, Leave It Behind and The King, written by Desert Mountain Tribe. Additional music is by Arthur Young (a wonderful instrumental track 'Gone to Blaises' that evokes the 1960s London Swinging Era!)

The PRX link to 'Jim' is here:

The 'Jim' soundtrack album: A radio play by Josephine Halbert, music by Desert Mountain Tribe is available to download on Apple iTunes/Apple Music and also via this website on the 'Jim' Project Music Page which also has a link to view the the Oniros Award nominated music video, the promotional video for 'Jim',  Never Stop (Live Version)